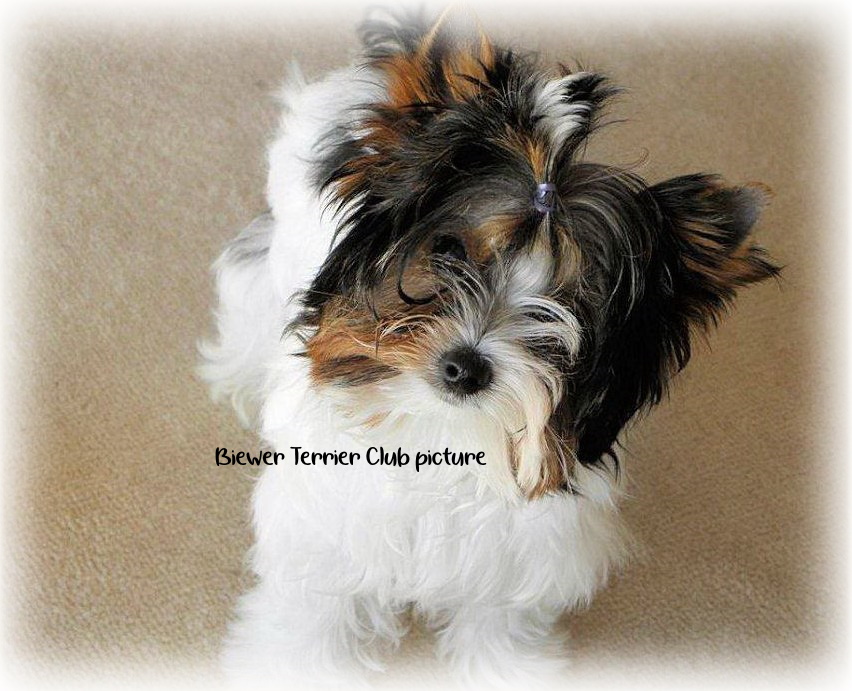 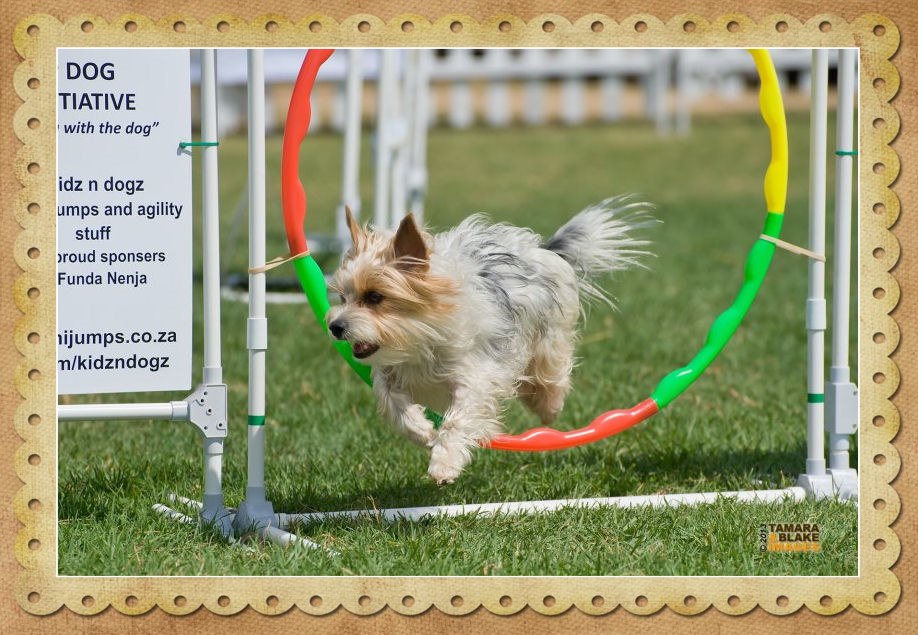 A Star is born

I lost my companion, Benji, during 2011 and was adamant I would not have a little companion again who I could love so very much. Then one day I bought the Animal Talk magazine which featured an article on the Biewer Terrier and I was immediately intrigued and got onto the internet to find a breeder to find out more.

That’s when I found Pieter Nel who introduced me to the breed and he had puppies available. He sent me some photographs and when I saw Dazzy I was hooked!  I had a very strong feeling that she was the puppy for me.  Dazzy had been born on 27 August 2011 and this was the beginning of October so I did not have too long to wait to fetch her and bring her home.  I walked into Pieter’s home and saw puppies running around and the one broke away and came running, believe it or not it was Dazzy.

From the first day Dazzy entered my life she made a difference in so many ways.  There was no crying or hiding, she just hit the ground running and became part of the family.   What a pleasure she has been and she has the most awesome character. So much energy, curious about every aspect of life, especially loves sticking her nose in everywhere and anywhere.  She shows no fear nor does she have any insecurities and she loves everyone she meets and enjoys every new experience.

Our journey began when we joined the Witbank K9 Dog Training and Therapy Dog School. I decided to take Dazzy on a dog socialising course and we have never looked back.    Now when new dogs join our club she is the first to greet them and make them feel welcome…

We completed the socialising course and then just seemed to transition into the obedience training.  We both fell in love with working together to achieve new things.  She thrived on my attention and I loved teaching her so we decided to explore and learn as much as we could together.  To be totally honest I was learning as much as Dazzy was.   Let me share some of our achievements with you in the first year of Dazzy’s life.

We completed our level one at our training school in the first few months and then Michelle Meyer, our instructor convinced me to train Dazzy as a Therapy Dog of which the obedience training is key.  She showed her potential time and time again during training sessions. We went to Vanderbijl to undergo a training session with Caring Friends in preparation to complete the Therapy Dog evaluation. Again Dazzy blew us away and did a perfect evaluation and was therefore passed immediately on the weekend. We were able to qualify as a team on that weekend and then started community visits.  We now visit old age homes regularly and she brings so much love to the older people. It is a bittersweet experience every time!

We had talked about entering the World of Dogs and Cats, Canine Good Citizenship (Bronze) and after her performance with the therapy evaluation I called the organisers of WODAC to be told that entries had closed six weeks prior. However when they learned that she had passed as a therapy dog and they realised her breed they called back and invited us to participate. They wanted a new breed in the program and knew she was more than capable of passing the evaluation.  Wow, I was so excited and put extra effort into getting her ready for the evaluation.  I also invited her breeder, Pieter Nel, to join us to see how well Dazzy was doing.

So off we went to the World of Dogs and Cats for the Bronze Canine Good Citizenship category. We did extremely well and Dazzy achieved her qualification. During the day we were approached to take part in the Dog World Parade as they wanted her breed in the walk. I just had to dress German for the breed, oh my, that was a bit of a run around but of course we made it happen and participated the following day. Well what an awesome experience it was to walk in the parade with my best friend and hear them introducing her breed to the crowds, I was so proud. We were then also invited to participate in the Animal Talk parade on the Sunday. Well did Dazzy show character in that parade! She walked the circle and barked every now and then as if greeting the crowd. I definitely think Dazzy made the breed proud during our time at Gallagher Estate.

Since then we have completed in elementary obedience at Goldfields and continue to do obedience training every Saturday morning at our club. My biggest challenge with Dazzy is she loves to have her nose on the ground... But we are working on that. You just have to love her spirit!! She has received her certificate from KUSA to continue participating in obedience at Goldfields, so let’s see how far we can go.

Our passion however is Agility and Dog Jumping.  We both love it and have so much fun.  However we may not compete until she is 18 months old so in April this year we will enter the competitive arena of agility and dog jumping. She works perfectly off lead and we look forward to a good 2013 at Goldfields.

At our clubs year end function in December 2012 Dazzy was awarded the Top Dog trophy which was a huge honor. She has excelled in every aspect of our dog training club. She often appears in our local newspaper for the therapy work at the old age homes as well as for dog displays we have done in our local community to introduce responsible dog ownership.

Dazzy is an inspiration to all... Even to people who don’t really like or see a small dog as an achiever. But once they engage her she wins them over, time and time again.  She does not behave like a small dog but as a natural competitor so watch out she is going to put the breed name out there in 2013!

Animal welfare in the U.S. and other countries is going to get a huge boost on Monday. In order to appreciate just how big a boost it will be, some sad facts must be acknowledged. First, there are approximately 600 million stray dogs and cats worldwide living on the streets. A permanent home is something only one out of every ten dogs born will ever find. In the U.S., animal shelters euthanize 2.7 million dogs and cats every year in order to make room for incoming strays, and one quarter of all the dogs that enter shelters are purebred. On February 17, however, a product called Zeuterin becomes available for shipment. Zeuterin sterilizes a male dog for life via a single injection. This method of sterilization is expected to greatly lower stray dog populations in the U.S. and other countries.

Zeuterin is the first-ever FDA-approved injectable sterilization compound, and it will remove the largest obstacle that currently exists with regard to the humane control of stray dogs in the U.S. Joyce Briggs, the president of the Alliance for Contraception in Cats and Dogs (ACC&D), is an advocate of alternatives to the traditional surgical procedures: “The truth is, we may have maximized what we can do with surgical spay-neuter.” Briggs calls nonsurgical sterilants “a game-changer for animal welfare across the world.”

Zeutrin’s February 17 shipping date comes directly on the heels of the worldwide outcry over the inhumane methods used by Sochi to rid the city of its stray dogs. Strychnine poisoning, though it is used in many other parts of the world as well, is the most common extermination method for the stray dogs of Sochi. According to Kelly O’Meara, a director at Humane Society International, meat is usually laced with strychnine and placed on the street where any animal is apt to eat it. When a dog eats the strychnine-laced meat, it results in convulsions and can “take up to an hour to die—it’s horrific and extremely painful for an animal to go through.”

Mass dog-killing programs are instituted in many countries, and incidents have been documented recently in Romania and South Korea in which dogs have been rounded up and bludgeoned to death. Sterilization of stray dogs and cats as well compulsory sterilization for pet dogs and cats is the only proven method for maintaining control of the stray animal population. The extermination of dogs in Sochi was going on before the city was ever chosen as the site for the Winter Olympics. Animal activist Dina Filippova of Sochi, Russia told the Associated Press that “we should understand that it is done not only before the Olympics but constantly.” Filippova said that the extermination company was killing “300 dogs a month” in Sochi even before construction for the Olympics began.

Feral cat populations in the U.S. are maintained through sterilization. Animal rescue organizations use a procedure called Trap, Neuter and Release (TNR). Healthy, non-agressive (but unfortunately unadoptable) feral cats are trapped, taken to a veterinarian for rabies vaccinations and to be spayed or neutered, and then released. After the procedure, the cats are returned to their original locations by the rescue organization. In the feral dog populations outside the U.S., Zeuterin is expected to cause a drastic reduction in numbers and, it is hoped, eliminate the need for dog-killing programs.  There is a $25 million award, offered by The Found Animals Foundation, that will go to the inventor of a single-injection sterilant that works in both cats and dogs. It is an award that remains available.

Zeutrin has a very simple composition: sterile water, the trace element Zinc Gluconate, and the amino acid Arginine. All of these ingredients are required for the body, and there are no preservatives added. In 99.6% of the cases, studies show that a permanent sterilization was created in dogs who were between three and 10 months old. The injection is being administered to dogs that fall outside that range with successful results.

Distribution of Zeutrin is limited to licensed veterinarians who have taken a two-hour certification course. Incredibly, five dogs can be sterilized with Zeuterin for the price of one, and five dogs can be sterilized in the same amount of time it takes to surgically sterilize one dog. It is also five times safer than surgical sterilization. The manufacturer, Ark Sciences, has regulatory approval in Panama, Bolivia, Columbia, Mexico, and the U.S. and plans to seek approval in other countries. It is hoped that a nonsurgical option that leaves the male testes intact (though slightly smaller) and decreases but does not stop testosterone from circulating will make sterilization of pet dogs favorable to those cultures both inside and outside of the U.S. who view the surgical procedure as unnatural or emasculating. While technically the compound does not become widely available for shipment until Monday, many dogs in the U.S. have already had the procedure. Last weekend, a “Zeuterathon” was held by a group of volunteer veterinarians in Los Angeles. Approximately 75 male dogs of all ages were sterilized in the space of a few hours. The suggested donation was $20.00.

As for the depressing facts at the beginning of the article, Ark Sciences envisions full adoption in the U.S. by the year 2020 through the use of Zeuterin. In other words, there will be an end to the millions of dogs being euthanized each year in animal shelters. The company was founded by an ordained minister in order to honor his commitment to making a difference in the world and is a mission-based private company. Stray dogs desperately need a game-changer, and one will begin for them on Monday, February 17.